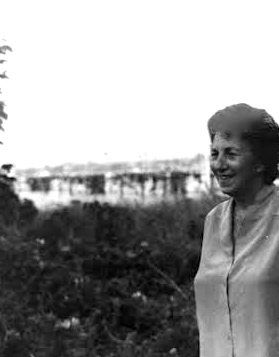 Her parents immigrated here from Calabria Italy and opened a grocery store in a small town in Connecticut. My mom was the second to last child in a family of six. She was raised by her older sisters, not really by her parents. Her dad died when she was just 21. She and her baby brother, Louie found him dead on the stairs of their house. She attended Catholic school. She hated it, because, she said, the nuns were mean. She quit high school before she graduated.

But she was one of the smartest people I have ever known.

Luigina Constantina Gabriela Rotello Friedman was an optimist. She believed in the good. She taught me to look on the bright side which was a good thing because my dad taught me to look at the worst case scenario. She loved flowers and beauty and fashion and people. She talked on the phone endlessly, the curly wire of the black rotary landline mingling with her cigarette smoke, her long legs crossed one over the other, breaking into Italian when the stories got good. She had a capacity for listening and a penchant for solving other people’s problems. She was an excellent cook, using lots of fresh vegetables and garlic, the other moms didn’t seem to use. She did the New York Times Crossword Puzzle by reading out the clues and asking everybody in the room what they thought the word was. She lived for saltwater and sand. She rocked a bald head toward the end of her life and dressed in leather pants months before she would die of lung cancer that found its way into her brain. Her words were taken from her in the end, but the last remaining were “I love you.” I wouldn’t believe this if you told me the same. I would think you were composing an unwatchable and sappy script for a Hallmark channel movie that Lori Loughlin would not be starring in. But it happened. I was there, in her hospice bed with her.

My mother saved my life, really. My dad was an alcoholic and very negative to boot. He stole a lot from me, verbal abuse his sword of choice. He was brilliant, except about himself. He gave me some good things, but the bad outweighed the good, I’m afraid. My mother taught me I could be anything, do anything. My mother gave me constancy and wings and bolstered the confidence my dad did his best to desecrate. My mother taught me to go to the beach and laugh and eat and have fun. My mother taught me that “this too shall pass” and to “put two feet in one shoe and march” (her hilarious way of telling me to keep going when the going was paved with broken glass). My mother gave me hope. If you don’t know what to give someone, this is the answer. Put hope in a box with a ribbon and you’ve got a better gift than anything you can find at Saks Fifth Avenue, Nieman Marcus and Bloomingdale’s combined.

When I first lost my mother, a month from finding out I would never have a child (I did though, her posthumous optimism helping me through three years of infertility), I didn’t think I would ever be able to get through the day. It hit me like a piano someone shoved out a window to drop dead center on my head. It hurt like ten million stab wounds. It hung around like a bad haircut. Then after about a year’s time, the pain lifted. I felt a little better. I picked my head up. But I will tell you this, I think about my mother every single day. She died 28 years ago and I think of her every single day. Yup.

I consider myself lucky, even though I don’t have a mother to spend mother’s day with. I had a mother. In fact, I had the mother of all mothers. And Jesus, God, gargantuan gratitude for that.