I’ll admit it, I was scared to go to the Free Speech Rally yesterday in Boston. I was, like scared, bordering on terrified (I know–what a wimp). I woke up with a pit of unsettled doom in my stomach–butterflies doing the death march.

My kids thought it was too dangerous for me to attend, so there was no support there. I kept making jokes about having my sister and daughter fight over my jewelry and clothes if I didn’t come back. My husband hopped on the “don’t go” bandwagon too, but I figured he was thinking about the potential of not having to get me a 30th anniversary gift next month.

I was scared to go stand in the middle of a large crowd that could possibly turn violent, but the truth is, I was more scared not to.

I am half Jewish. I am half Italian. I am a woman. I am a mom. I am a liberal Democrat. I am a human being. I believe in everybody until they give me a reason not to. I was raised to be fair, to take care of the underdog, to live by the golden rule. I would not mind having less, to give everybody some. I believe fervently in love, in equality, in marrying and/or committing to whoever the hell you want.

And I believe that you stand up and speak out when inequality and hate begins to permeate the air, no matter how scared you are. And make no mistake, it is polluting our country right now.

So, yeah, I was feeling a lot of fear,  and would have preferred not to drag my privileged white old lady ass to the middle of a potentially deadly rally yesterday and instead sit myself down at the nail salon for a nice mani and pedi, and accompanying massage, but I persisted (not that I should get any kind of medal for this, but just sharing my little story). BECAUSE IF NOT ME, WHO? AND IF NOT NOW, WHEN? AND IF WE DON’T STAND UP AND BE COUNTED AT THIS MOMENT, WE WILL SHIFT INTO REVERSE LIKE FUCKING MARTY MCFLY IN BACK TO THE FUTURE.

Anywho, I had nothing to be afraid of. The rally was incredibly peaceful, the Boston Police were out in force and keeping it all orderly. Governor Charlie Baker, Mayor Marty Walsh and Police Commish William Evans, were in alignment and had on their leadership hats (and I thank them profusely). The people I met and interacted with were there to say no to Nazis and white supremacists, and not to make trouble. I witnessed no violence whatsoever, and even saw a bevy of BP quietly walk over to a man, check his pockets, find a knife and silently handcuff him and walk him out of the proceedings without incident.

The crowd was a mixture of race, gender, age and sexual orientation. I even saw a few dogs. The signage was epic.

I will keep attending these rallies, no matter how terrified they make me, keep yelling and writing and tweeting and posting and screaming until I don’t have a voice. Because I believe as flawed as we are, we are better than our president and our administration. I believe it’s our responsibility to help one another get through this time that’s unprecedented in modern history. 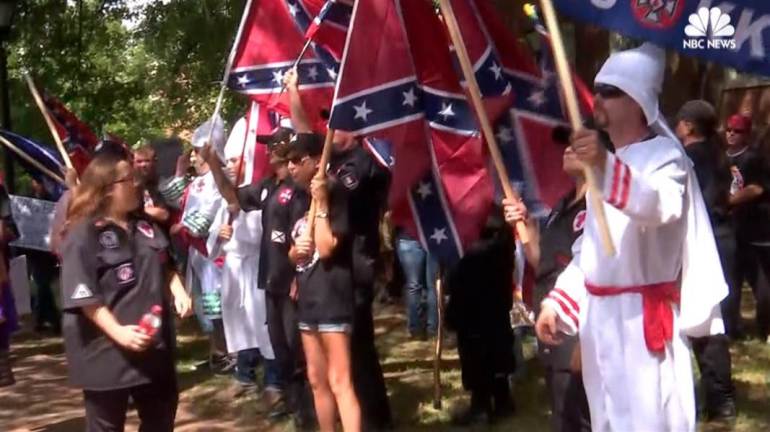 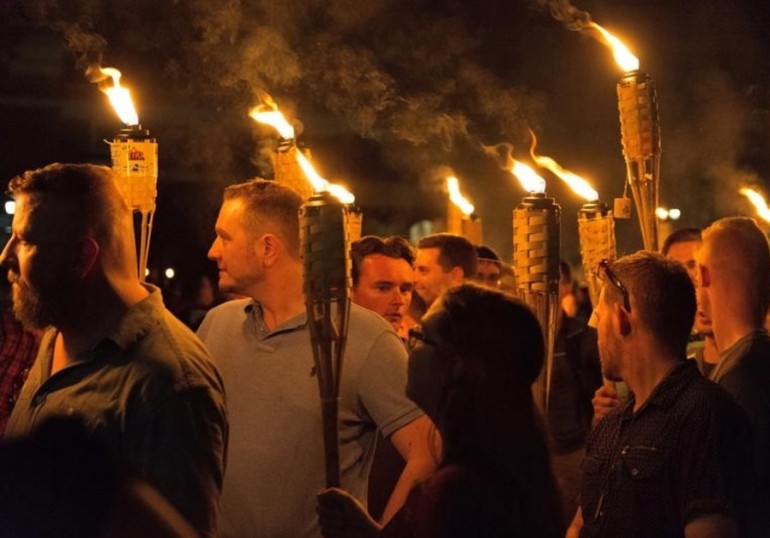 I was deeply disturbed and nauseous about the Charlottesville rally yesterday, walking around in a daze, wondering how we find ourselves here, where we have a president so bigoted and racist and insulting to practically every group, that white supremacists and Nazis are now bold enough to forego the hoods, and blatantly  show their faces loud and proud. This is what happens when you elect a president who models intolerance, who has deemed it ok to fly your Confederate flags and swastikas out in public and ram a car into a rally of people who don’t believe what you believe (killing a young girl, injuring more than 19 people).

And what did Trump have to say about this grotesque fiasco, this unamerican little get together? Quoting the NYT, “During a brief and uncomfortable address to reporters at his golf resort in Bedminster, N.J., he called for an end to the violence. But he was the only national political figure to spread blame for the “hatred, bigotry and violence” that resulted in the death of one person to “many sides.” MANY SIDES. There you go, the 34% of you who still support Trump. Here’s your country. Here’s your president, a man who cannot call it as it is. Why? Because white supremacists and Nazi sympathizers and the alt. right ARE A BIG PART OF HIS BASE. Remember, it’s all about the votes, not the people.

MANY SIDES. There you go, and still 34% of the public still supports Trump. I say to that 34%, here’s your country. Here’s your president, a man who cannot call it as it is. Why? Because white supremacists and Nazi sympathizers and the alt. right ARE A BIG PART OF HIS BASE. Remember, it’s all about the votes, not the people.

And make no mistake, David Duke, grand poobah of the Klan said of the Charlottesville rally, “This represents a turning point for the people of this country. We are determined to take our country back,” Duke said. “We are going to fulfill the promises of Donald Trump. That’s what we believed in. That’s why we voted for Donald Trump, because he said he’s going to take our country back.”

Back from? Back to?

We fought a war against Nazis once and we won. People gave their lives to protect us from wiping out the whole population of Jews. This is how it begins. Free speech is a tenet of this country, but people with hate running through their bodies instead of blood, that is not.

My gratitude goes to the man who is calling it what it is and saying it straight, Governor of Virginia, Terry McAuliffe, who said,

“I have a message to all the white supremacists and the Nazis who came into Charlottesville today. Our message is plain and simple. Go home. You are not wanted in this great commonwealth.

You came here today to hurt people, and you did hurt people. But my message is clear. We are stronger than you. You have made our Commonwealth stronger. You will not succeed.

If only our president could have such clarity and humanity.

Today I woke up at 4:30. I tried to go back to sleep, but you know what happens–you start thinking about what you have to do, ticking off each thing and how you will accomplish it, then you start worrying about being up so early and how it will affect your day, and then the birds start chirping and before you know it, you’re making coffee.

BUT, when I reached for my phone, it seemed getting up early today was a good thing, because I could start the par-tay– there on the front page of the New York Times was  unlikely breaking news–a bloodied Obamacare repeal laying on the senate floor. Yip–to the ee–vote DOA, thanks to Senators John McCain, Susan Collins and Lisa Murkowski.

GRATITUDE to those who care enough about the people of this country to vote no. And in particular, John McCain, who has sealed his legacy as being a genuine hero, for real. These three proved today that they are not Republicans, they are human beings. Let’s all sing the hallelujah chorus together, shall we? 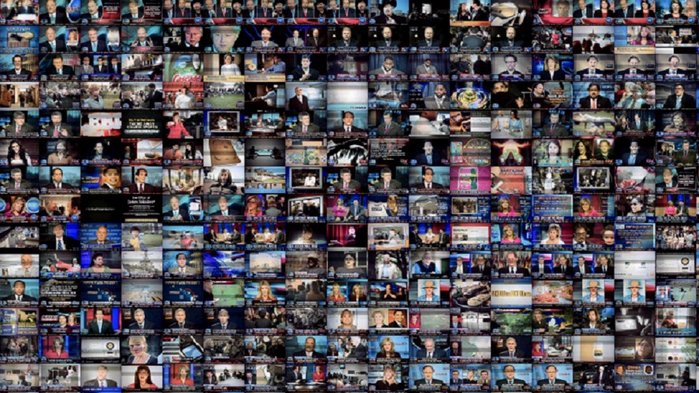 I know I am not alone in the middle of the night when I wake up and grab for my phone to make sure we’re still here.  I know there are so many others who share my fear and anxiety. They’re up, too. I know many I could probably text,  because their minds would be spinning in the same way mine is, worrying, wondering, freaking the fuck out about what will be next.

I know that my lack of concentration on anything but what is happening in our country is diminishing my ability to enjoy all the good stuff.

I just can’t allow that.

Because it will mean that Trump not only won the election, but won too much of my attention. He’s the last person I want taking up residence in my head and yet, I can’t stop myself from ingesting too much news. Has he made me an addict? Do I need a 12-step program to get clean of his filth?

I am looking at the sunrise over the trees right now, the frozen earth on a 20 degree day, and my dog snuggled up on top of folded laundry like the star on a Christmas tree, and I think, stop the madness, girl, get hold of yourself. Today you will get clean.

But I can’t, because there is too much at stake, and if we ignore it, or try and block it out, the worst could happen (hell, it’s already happening). We all have to be watch dogs, we all have to be prison guards protecting our constitution, our rights, each other. I’ve said it before and I’ll say it again, and it’s never been more true–we are all we’ve got.

We are all immigrants. That’s what this country is made of. “Give me your tired, your poor, your huddled masses…..” I’m proud of my ancestors. I’m proud to be of immigrant stock.

What are we doing right now? WHAT ARE WE BECOMING?

I’m only happy that my parents are dead, because this would kill them, like it’s killing me.