By now, you probably know, what with all the beach shots and the flower pics and the whining and complaining about winter, that I AM NOT A GIRL WHO LIKES THE COLD. Well, on our recent trip to Buffalo, we took an hour and drove up to the American side of Niagara Falls. (We didn’t have our passports, so we couldn’t go to the bigger, even more dramatic Canadian Falls.) I’m sorry, but there’s just no other polite way of describing one of the Seven Natural Wonders of the Modern World, other than to say HOLY. FUCKING. SHIT.

First of all, it is mammoth, like a moving Grand Canyon. Secondly, it is cold, like one of those nights when the temperature drops to -10, and your heat doesn’t work and you have no pajamas. Thirdly, everything is FROZEN SOLID like you’re in a life-sized fridge. The river is choppy, white water-ish ,because of the force of the Falls, or I should say, it would be choppy if it wasn’t FROZEN IN PLACE LIKE A STATUE.  Literally this water has STOPPED COLD. It’s like a Batman villain showed up and waved his hand and said, ok, FREEZE. Also, the drop down to the river, is pre-tty big. And you’re staring at this rushing water, and the backdrop of white, and it’s a little disorienting, so you think maybe you might fall, like into the freezingness of this awful place, and you just want to go back to the car (Ok, maybe I’m just talking about me, here.) Anwyay, the power of this thing, was just mind blowing. We were all sort of shocked by its intensity. Even the unimpressible kids were impressed (It really takes something big to get a lifted eyebrow from a teenager these days.)

Even though I hate the cold, like it was evil itself, I was grateful to have seen the falls. I hadn’t been there since i was 8 and went with my family to Expo 67 in Montreal. I was terrified then, too. And I remember we went on The Maid of the Mist, which was the boat which goes under the falls. As young as I was, this just did not seem like an intelligent idea to me. Anyway, when you see something as big as NIagra Falls, it reminds you of how small you are. And how big the world is, and that you are just a little part of it. And sometimes that’s a really good thing to remember. 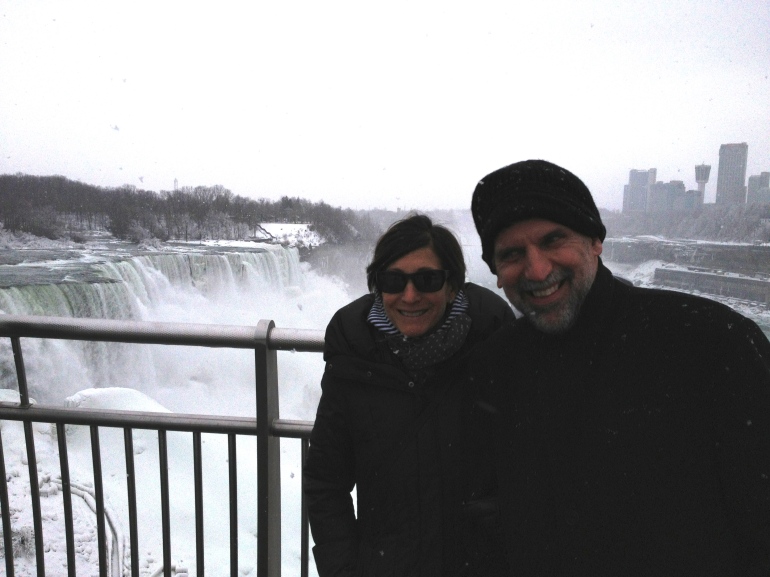