It used to be that The Curse of the Bambino plagued our fair city. But in my lifetime, and more impressively, in my children’s lifetime, the Red Sox have won the World Series three times. THREE. COUNT ‘EM. THREE. TIMES. It’s getting to be sort of a normal occurrence around here. Well, not really, but sort of.

My husband, who is an ivy league trained Ph.D chemist trying to cure Parkinson’s, would give up his career and family to be a professional baseball player. He is a walking statistical machine. He ought to have a website called “Stump the Pathetically Obsessed Baseball Guy.” He is constantly making baseball analogies. In fact, maybe his show should be called, “A Pathetically Obsessed Baseball Guy Talks Life as a Baseball Game.” He has always tried to teach me about the nuances, and strategy of the game. And just how much that little white ball says about life in general, but it just never really worked for me, and I basically zoned out when he would try and compare a traumatic event to a ball game.

Baseball is a little slow. Actually, a lot slow. It can be tedious, and very similar to watching grass grow. I mean, take me to a Celtics game, and I’m in. Things move FAST, there are dancers and monitors and crazy stuff happening all over the place. That’s my speed, but baseball, ugh, just not enough going on to keep my novice interest. I used to go to games before the kids, and then afterward, too. I basically just went for the Fenway Franks. But eventually, you could buy them in your grocer’s freezer case, and I just dropped out, letting Peter and the kids hold down the fort on this front, so we wouldn’t be asked to turn in our Boston residency cards (because if you’re not a Sox fan in this town, they ask you to leave).

Anyway, all three times the Sox have made it to the the World Series, it’s lit a fire under me, and I’ve maybe even gotten a little rabid. You just can’t ignore the craziness of this city when we have a sports team in a playoff situation. Nobody talks about anything else, everybody is sleepless-in-Seattle tired, and people all get very superstitious. I, myself, have five hats on the tv that COULD NOT BE MOVED. There’s also a large plastic Sox cup in the bathroom Peter was using to rinse off the dog’s muddy paws, and although it’s been irritating me, I have not moved it an inch since the series started. Last night on the news a guy talked about not changing his underwear or socks for three days. I am glad at least Peter isn’t that guy.

After the Boston Marathon bombing, this city was pretty depressed and freaked out and sad. The Sox supported Boston and came out swinging. They know that people love baseball here. They know that they’re a source of fun and a certain kind of glue. As Big Papi said at the time, “This is our fucking city.” You can hardly go anyplace where you don’t see a “Be Strong” t-shirt or hat on someone. The Sox adapted it be “B Strong,” and even mowed it into the field at Fenway. This team has been a source of pride and camaraderie as the city has had to heal from an unspeakably awful wound, that occurred during one of our other beloved sporting events.

Anyway, in case you live in a cave, The Boston Red Sox won the World Series last night, at the famed Fenway Park, their home, which hasn’t happened since 1918 (the year my mom was born). I stayed up way too late. I’m exhausted today. But guess what? I saw something I’d never seen before in this game, in this team, a life lesson–“Try your best. And then get out there and try harder.” There you go, Peter. I think I finally get it. I just might watch the whole season next year.

Out of the mouths of babes, or the eyes, as the case may be. Check out this unbelievable video of a mom singing to her baby and the baby having a very mature response. Hey mom, you should try out for “The Voice.” Gosh, I miss having a baby (you know, except for the getting up in the middle of the night part).

My daughter’s high school soccer season ended yesterday. It was a sunny day that turned into a cold evening. After the game, we huddled together, shivering and had hot chocolate and cupcakes. The underclassmen had decorated the entrance with balloons and posters for the graduating seniors. I won’t bore you with scores and and wins and losses. I will say that the girl’s record did not reflect their talent, or their heart. And that, I will elaborate on.

I didn’t play a team sport in high school. I don’t think we had a soccer team back in the early 1800’s. In fact, I didn’t do anything competitively, except diet. I ran, I biked, I was a cheerleader for a few years (GO WILDCATS!), I took exercise classes at an early version of a women’s gym, and had a little dalliance with tennis. So, I am not only proud of watching my daughter play soccer, I’m fascinated. I have no idea what being on an athletic team would have been like for me. But I imagine it would have changed me in ways I will never know.

Ally is a great athlete. She is physically strong and mentally tough and has the never-give-up attitude you need to win. I have been sitting on soccer fields watching her play since she was five. She is on one of the best club teams in Massachusetts. She has devoted a lot of her time to soccer. Not because we force her to, but because she loves it.

What I love is witnessing all the camaraderie a team sport fosters for girls. While our team didn’t exactly have a winning season, they did offer the kind of support to each other that you need when you’re not winning. They spurred each other on, and helped one another through everything  from physical injuries to bruised egos. Mean girls? Not in soccer. Is this the antidote to girls being pitted against one another?

A four game suspension for seven girls (a pre-season party, and a Facebook photo, and a call from a parent I WOULD LIKE TO TALK TO) started the season off with a whimper, not a bang. But through the twists and turns and pivots of a difficult season, every girl on that team left it on the field during every game. Every girl supported every other girl at practice, at team dinners, in texts, and on bus rides. And to me, that’s what seems really important at the end of the day (or game). For girls to feel strong, and  be stronger because of one another.

Lou Reed has left the building. Only 71. Way too young. Talk about a cool guy. Here’s to you, Lou.

How do you get out of the way when you’ve just fallen on the ground?  Let’s get rid of Major League Baseball’s Rule 7.06. Rally today on the Common. #RedSoxNationispissed.

If you’ve ever been in a class, a meeting, a movie, and who hasn’t, where you’re stomach is talking to you, in the form of say, GAS, then you will want to read about your next purchase.

NEWS ALERT: If you’re looking for the best blow job, I mean blow dry, The Dry Bar is now open in Back Bay and is scheduled to open soon in Chestnut Hill. I went to one in NYC and looked like a freaking movie star for five days.

The Sox won the first game of the World Series. Yay! (Shut up, I know they lost last night, but this isn’t the complain-a-tude-a-thon, now is it?)

Fifty shades of why this woman is gray.

Pat yourself on the back, even if you’ve just cleaned the kitchen.

If I had an office to go to that wasn’t right upstairs, and I didn’t have to call in sick to anybody, but myself, I’d do it today, because I feel awful. But here are some good excuses if you need a day off (and a laugh).

If I saw this running down the street, I’d probably run the other way.

Good article on one of the worst people on the planet.

There was a full on rainbow the other night that I will never forget for as long as I breathe.

I love this game–what kind of house you can get for a certain amount of money around the country. I wish I resided in Minneapolis. Of course, then I’d have to actually live there.

I love a pretty website and this one fits the bill.

So, yesterday, I was getting out all the layers. Finding the best coat to wear, digging out the gloves. I was going to my first World Series and was crazy excited. Jake went with Peter in 04, and Ally went with Peter in ’07, but I was a Sox World Series Series virgin, and I was about to get de-flowered. And then, and then, I got the unmistakable nausea that can only mean one thing: a fucking migraine. I have a long history with the headaches that make death seem like fun. I have been treated by specialists, done acupuncture and biofeedback. And truthfully, I have rid myself of them for the most part, but once in a while I still get a whopper when the barometric pressure goes up or down. And yesterday, that’s what happened, plus I have some pretty good congestion going on, so that probably didn’t help. Anyway, I took a Compazine and slept, and called it around 6:30: my layers would be blankets on the couch. And the Fenway frank my mouth was watering for, would be frozen gluten free waffles (I know that sounds sad, but I actually love them).

Anwyay, our friend Charlie got lucky and got to go to the World Series. I watched the game thinking how happy I was not to be there with the noise and lights, because that’s how much my head hurt. Of course, the other part of me was thinking how shitty it was that I didn’t get to be there. But through the magic of group texting, Peter, Ally and even Barcelona Jake and I all watched together. I fell asleep before Papi hit his home run, and woke to the news that the Sox killed it. 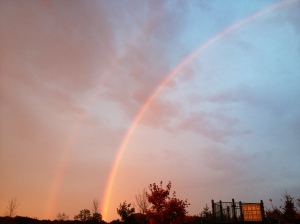 I’ve always loved Oprah. In the early days of her show, when I was a freelancer, or pregnant with epic morning sickness, Oprah gave my day some structure and often a hit of heart. She’s lost some of her appeal for me, but I have to say that when  I watch Super Soul Sunday, I see that she’s just trying to get out the really important messages to a mass audience. This one from Dani Shapiro, author of “Devotion,”is really right on. “Recognizing the possiiblity of the divine in any given moment.” I do believe the full/half double rainbow over the soccer field yesterday, which stopped the whole crowd in its tracks, was one of those moments to take in. An ordinary ass whooping became something I will never forget. You had to take notice. And I did. (Partly because it was actually so incredibly unusual, I thought it could be the freaking Rapture.) Anyway, this is a good reminder to be present. Gratitude goes to Ms. Shapiro today.