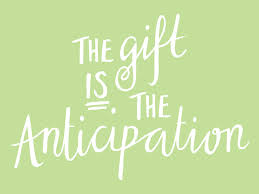 Hey, turns out that “the getting really excited for something good that’s coming up”  is healthy. Check out this article. It says that anticipation doubles your happiness about an event, and that’s good for you. Pay attention and get psyched for your summer vacation.

Hey, here’s why I haven’t been gratituding (I know this isn’t a word, but maybe it should be), for the last several days, I designed and implemented (I’ve been working on this for months and months, but this was the three decorating-a-thon, where we work a zillion hours to fill three gyms and an entryway) a super fun giant party for the 400 + seniors on prom night, to keep them safe and not drinking and driving, which is what I think I did on my prom night–no judging–didn’t you? Aside from all the decorations, each room gets filled with all sorts of cool stuff like a life sized twister, blow up obstacle course, airbrush tattoos, food galore, a DJ, a prize table featuring the big prize of a Mac Book Air, and loads of other stuff, too. It was exhausting, and I am bone weary. Here’s a tour of a 50’s ,60’s, 70’s, 80’s themed Blast from the Past After the Prom Party.

I love to play the game “What would I wear on the red carpet?” Because you know, I’m so frequently on one. Anyway, this is like maybe one of the best, most gorgeous dresses I have ever seen, and is at the top of my list for future red carpet events. Rarely have I had such a reaction to a piece of clothing, but it’s so beautifully draped and the fabric is so fragile looking, yet bold and soft at the same time, that I actually get a visceral reaction of total calm when I look at this thing. The simplicity of the way this thing lays on the body is just astoundingly perfect. Wow. Just wow.