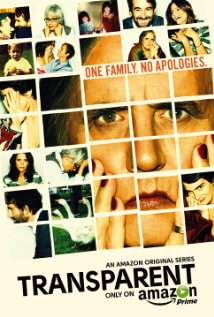 One of the best shows I’ve seen all year, isn’t on a network, or even on cable. It’s not on Netflix, either. It’s on Amazon Prime. And if you don’t have it, get it. This show is extraordinary, and might be one of the top ten things I’ve ever seen, EVER.

“Transparent,” is about Jeffrey Tambour,  who does not play his role as a man transitioning to a woman in his sixties, for laughs, but rather, plays it poignantly, thoughtfully, with a shit ton of heart and some bold fashion statements. As a divorced father of three, the revelation that dad wants to become a woman makes everyone rather “transparent” about what’s going on in their own lives. And while there are plenty of laughs, the overall effect is soulful and sad, but also honest and hopeful.

Tambour, usually a dry funny guy, is straight here (no pun intended). He is not a drama queen, instead he seems to be a real person going through a complicated thing that he hopes will finally make him whole. He just won a golden globe for this role.

It’s 13 degrees out, and if you’re like me, tv helps these horrible winter months pass until we get back to the good stuff. Watch this show. Tell me what you think.