Joseph H. Biden Jr., left, offers words of encouragement to his bedridden son, Beau, before Bidden was sworn in as the United States Senator from Delaware in ceremonies in Wilmington hospital on Jan. 5, 1973. Biden’s other son, Hunter, talks with Robert Hunter, Biden’s father-in-law. Beau is still in traction from an auto accident on Dec. 18, in which the Senator’s wife and daughter were killed. (AP Photo/Brian Horton) 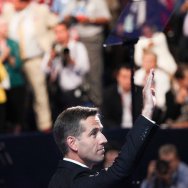 Vice President Joe Biden has already lived through enough tragedy for a couple of lifetimes. Can you give a guy a break?

In 1972, a tractor trailer plowed into his wife’s car, killing her and their 13 month old baby daughter. His two sons, Beau and  Hunter were injured, but survived. But now Beau has sadly succumbed to brain cancer, at the age of 46.

There are people who say that you don’t get more than you can handle. I always hate those people. Who wants to handle heart crushing, soul smoldering events, unfair, dirty tricks of cells and chance. Nobody is who.

When bad things happen, we’re forced to dig down into the center of our core, not for answers, but for strength, for the will that will drive us to continue getting up morning after morning to face what it is fate has planned for us. Sure, we are in charge of the trips to the grocery store, how we spend our time, our pursuits, what we give, who we love, but the rest of this show is not ours to call. Things happen that are beyond what we can imagine. We are not driving the bus, so much as deciding how we will sit on those uncomfortable seats.

Here’s to the Biden family.

One thought on “gratitude-a-thon day 617: tragedy upon tragedy”