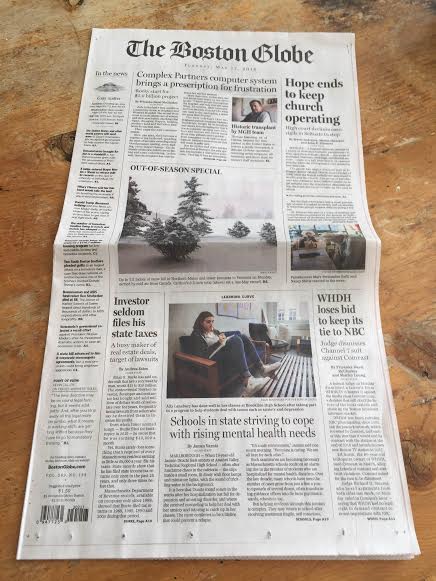 While it’s that time of year where parents are gloating about the acceptance of their children to Harvard and Princeton and Yale, I am more proud than any of them, to see my daughter on the cover of the Boston Globe yesterday, talking about her experience with a great program in her school that helped her to catch up on her work after she had an ACL surgery, followed by a period of anxiety and depression related to that injury.

Her ability to be open and honest about what happened to her, will likely help other kids who might be suffering from the same sorts of issues, speak out and get some help. This is not easy stuff. Ally could have kept this experience private, but she hates all the stigma surrounding anxiety and depression. She believes, like I do, it’s just an illness like cancer, and she wants to abolish the ridiculous secrecy around it.

It was not an easy winter over here. And it had nothing to do with the weather. I wanted to write about what my daughter was going through, but it was hers and not mine, to discuss, and so I did not. Until now. Because Ally making the choice to talk about what she went through with such candid honesty, gives me permission to do the same, not to mention to celebrate her contribution to changing the “shhhhhh, don’t talk about it,” attitudes toward mental health issues.

Ally has been playing soccer since she was five. She has given up social events, and made a commitment to it fully and happily since then. She has played at an elite level, and has traveled all over the country, as well as the U.K. with a ball at her feet. It was the biggest part of her, and it still is. Missing practically her whole senior season of soccer, something she’s always looked forward to, as well as her entire season of club soccer, with girls she has played with for years, was devastating. Think about the thing you’re most invested in, and take it away. You feel depressed just thinking about it, right?

But there is nothing more important than resiliency in the face of shit-hitting-the-fan events. Ally has shown us who she is by not only getting through this experience, but by sharing it. This girl (my turn to gloat)  is not only a great athlete (heading to Trinity College to play soccer–GO BANTAMS! ), she is an exceptional person with amazing character, intelligence, resiliency, depth and an A+ sense of humor. I couldn’t be more proud. Maybe if she were president, (but probably not.) Love you , Ally girl.

Shout out to Brookline’s BRYT program and the exceptional people who run it. Thanks for what you do.