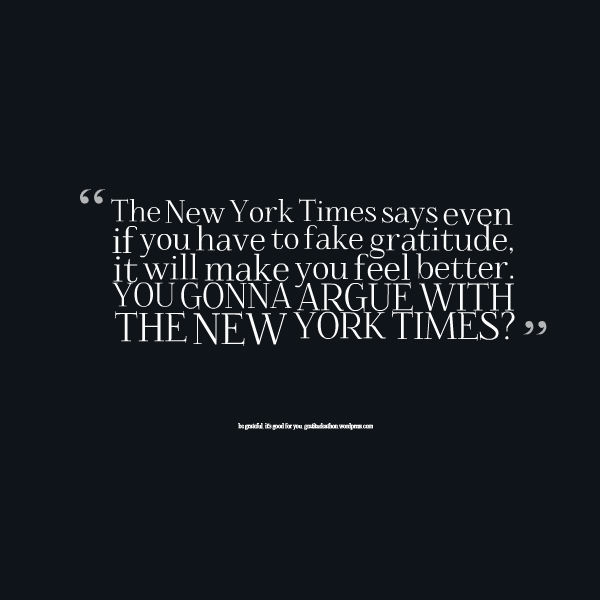 “Building the best life does not require fealty to feelings in the name of authenticity, but rather rebelling against negative impulses and acting right even when we don’t feel like it. In a nutshell, acting grateful can actually make you grateful.” –Arthur C. Brooks

I’d like to tell you that I’m a naturally grateful person, that I came out of the womb thanking my mom for the cool, full equipped 9 month rental. But I consider honesty, as important as gratitude, and the both of them almost as important as warm french bread. so I can’t tell you that, because that just wouldn’t be the truth.

Anway, I didnt’ want to be a pessimist, it’s just that I seemed to be on automatic pilot when it came to worrying. Like my dad, I tended to worry things would go wrong instead of right. I was actually named most pessimistic in my high school class! Yes, that happened.

Interestingly (or maybe predictably) I married an optimistic. I mean, I married an optimist like you’ve never met before. This guy made my mom look negative. He was constantly trying to get me to put on his rose-colored glasses. I wasn’t having it. If you didn’t put in your worrying hours, all hell could break loose. You can imagine this was a bit of a conflict for us. The thing is, and I hated to admit it, his way of looking at the world seemed to work for him. Things always seemed to go well for the guy. He expected them to, and damnitall, they did.

Over the years, in and out of therapy, I worked on Peter’s way of looking at the world, occasionally wearing his sunny specs. Slowly, I got better and better at replacing negativity with positivity. You would never mistake me for Pollyanna, but you know, I was better.

Then, two years ago in the month of December, things weren’t good. Several things happened at the same time, which sucked the life out of me. My uncle who was like a dad to me (my mom died 23 years ago, and my dad, 13) was losing his battle with dementia, my husband had a health issue, and something else I can’t remember (probably that I am losing my memory). I was feeling down in the dumps, and negativity was creeping in. I was on Facebook, but not really using it much. On the first day of December I decided I would use it to write something I was grateful for every day for one month. It was kind of a whim. I thought, why not? I called it the gratitude-a-thon. All of a sudden people were commenting and sharing in my hunt for good stuff. By the end of the month, and the posts,  people were encouraging me to start a blog, or write a book. I had no such intention, but when I stopped my Facebook rants, I found I missed the hunt for gratitude. I missed the positivity that came from being grateful. Gratitude was like a souped up multi-vitamin that made me feel good. I was looking at my days in a different way, looking for the good stuff. A month later, I started this blog.

The thing is, that having gratitude, noticing things that are good in your life and being grateful for them, really does make you feel better, happier. It’s so simple. And yet, it’s undeniably profound. I even find having gratitude has helped me cope with bad things much more easily and successfully. This is really something for a former negativity queen.

I was not surprised to read this New York Times article, in which the science of gratitude is explained.

“Evidence suggests that we can actively choose to practice gratitude — and that doing so raises our happiness.

This is not just self-improvement hokum. For example, researchers in one 2003 study randomly assigned one group of study participants to keep a short weekly list of the things they were grateful for, while other groups listed hassles or neutral events. Ten weeks later, the first group enjoyed significantly greater life satisfaction than the others. Other studies have shown the same pattern and lead to the same conclusion. If you want a truly happy holiday, choose to keep the “thanks” in Thanksgiving, whether you feel like it or not.

How does all this work? One explanation is that acting happy, regardless of feelings, coaxes one’s brain into processing positive emotions. In one famous 1993 experiment, researchers asked human subjects to smile forcibly for 20 seconds while tensing facial muscles, notably the muscles around the eyes called the orbicularis oculi (which create “crow’s feet”). They found that this action stimulated brain activity associated with positive emotions.

If grinning for an uncomfortably long time like a scary lunatic isn’t your cup of tea, try expressing gratitude instead. According to research published in the journal Cerebral Cortex, gratitude stimulates the hypothalamus (a key part of the brain that regulates stress) and the ventral tegmental area (part of our “reward circuitry” that produces the sensation of pleasure).

It’s science, but also common sense: Choosing to focus on good things makes you feel better than focusing on bad things. As my teenage kids would say, “Thank you, Captain Obvious.” In the slightly more elegant language of the Stoic philosopher Epictetus, “He is a man of sense who does not grieve for what he has not, but rejoices in what he has.”

Anyway, during this week of Thanksgiving, when you’re all thinking about it, at the risk of being annoying and like a religious fanatic, I just thought I would share my gratitude conversion story. I mean, you can doubt me, but are you really going to doubt the New York Times?

Some days I wake up and I feel like “Gratitude? Fuck gratitude.” But then I wait a minute for it to come, as I swiftly roll through my mental rolodex of things that are good. I’m not Sarah Palin, I don’t live in poverty, there are, like, 47 kinds of potato chips, for example. There are so many of things to be grateful for that I can’t even believe how I could have only moments ago said “Fuck gratitude.” (But, well, you know how I love to say the “f” word).

That’s the thing about gratitude. It’s like air, it’s all over the place. It can be hiding under your couch, or in your underwear drawer, or in the cabinet where you keep the soup pot that you thought was the perfect size, but actually turns out to be too big to use (you can’t even fit it into the sink to wash–what were you thinking).

Let’s say you were hanging off a ledge, in 90 degree heat, with a flirty grizzly salivating over your fingers. You might wonder what the hell you could be grateful for in THAT situation. But think about it, it could be raining. I mean, that’s how this practice works. There is, 100% of the time, something you can find that is a little gift,  in virtually any situation. You just have to get into the head space. It’s a change in the way you live day to day. Instead of looking for the bad stuff, you seek out the good stuff. You gotta become a gratitude hunter, look for it in every place you go. Once you open up your own personal gratitude search engine, you’ll find that that living your life can become  better, nicer, funner (you can even make up words if you want, too).

Heres a good article from Harvard Medical School, explaining how and why gratitude actually makes us healthier. There’s loads of impressive research on this practice, and good, solid reasons for you to sharpen your gratitude skills, like a set of Wusthof’s. I mean, if it can help me, it can help you. And if it can help me AND you, that’s all of us. Can a a little bit better of a world be far away?