I went back to One Day University yesterday (for my PhD, haha). Peter and I went to our first One Day back in September, which was so much fun, we signed up again. It didn’t disappoint.

The basic principal behind ODU (and no we did not rush any frats or sororities, or take any mid-terms or finals) is for the general public to be able to keep learning from some of the country’s best University professors. It’s a great afternoon, and  you walk away having learned something new.

There were six classes, and you get to choose three. We went to When Intuition Fails, Why We’re Often Wrong When We Think We’re Right, which was taught by a Union College Prof., who was a cognitive psychologist, and showed us examples of how our attention and memory are not nearly as reliable as we believe them to be (believe me, my memory is shot, so he had little convincing to do with me). He wrote a book called the Invisible Gorilla, in which he elaborates. Here is one of the test he gave us  (it was this video, but without the voice, and he impressed upon us many times to pay STRICT ATTENTION to how many times the kids in white shirts passed the basketball).

I flunked. On all fronts. Me, who  think I”m so observant. Ha! If this wasn’t a convincing argument not to text and drive.

The second class was The Beatles, The Sixties, and Popular Culture. This professor was a Brit. from Boston University and tied together the Beatles and all of the culturally significant events of the 60’s, and yes, we hummed along. He was really great, and extremely knowledgeable.

Peter and I split up for the third class. He attended The Five Most Powerful People in the World, taught by a Upenn Prof.,who’d been in Obama’s administration, and on Hillary’s Policy planning staff. I chose How to Read and Appreciate Great Literature, taught by an adorable professor from Bard, who happened to be from the small town my mother’s family is from, in Calabria. This guy was wildly charismatic, and his discussion of how to get the most out of hefty classics, and hard to read works, had as much to do with reading, as writing.

Peter and I talked a lot about the classes, and vowed to attend the next one when it rolls into town. We also determined that kids should get a liberal arts education, and then another education to get job skills. But of course, because of the college costs, who has the time or money for that? Which is a damn shame. Anyway, we’ll be at the next ODU. Maybe we’ll see you on campus. 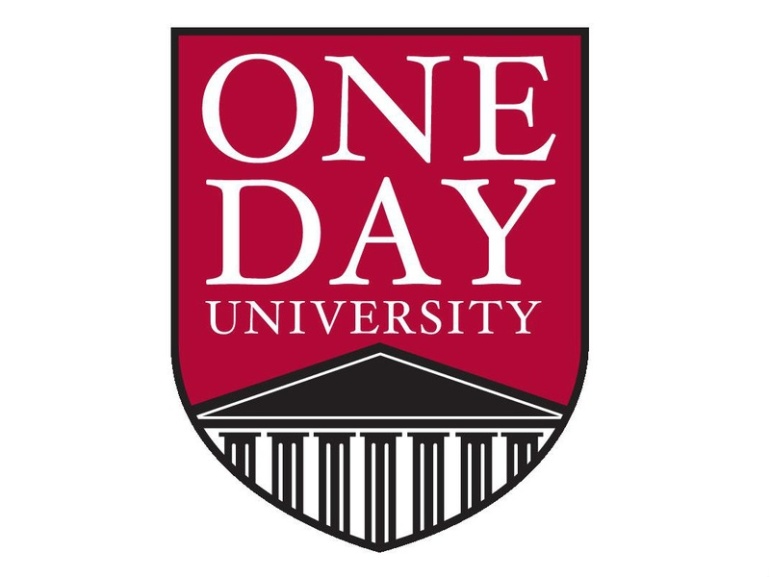 Last Sunday I hobbled to the Westin Hotel (with absurdly swollen eyes from crying the previous night over the news that a friend had died) for something my husband and I had signed up for the previous month, called One Day University, sponsored by the Globe. And yes, I graduated.

There were eight classes offered and you got to choose between two every few hours. Because the Jimmy Fund walk was going on, the Westin, literally 15 minutes from our house took an hour to get to because we were re-routed through the North End, so we missed The Civil War and Abraham Lincoln: What’s the Fact and What’s the Fiction. But we did make the Science of Happiness (kids don’t make you happy, but people think they will, gratitude will improve your happiness–can you say gratitude-a-thon), The Genius of Michelangelo (he was really egocentric, with good reason though, right?), and Untangling the Web: Why the Middle East is a Mess and Always Has Been (which by the way, did not untangle the web for me and left me even more confused, as if that’s even possible).

Anyway, this thing was really fun. There’s another one in March, and I think we’ll go again. And if my son doesn’t do more studying and less partying this year, it may be a good school for him to transfer to.