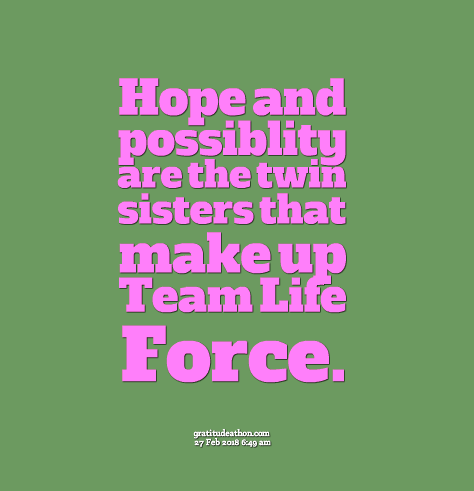 When you think this will happen, but instead that happens and that is really, really good and opens up an extra large window of maybe. When a sliver of light that hadn’t been there before is now not only there, but growing in size at a rapid pace, you’re happy you were born. When a small thought becomes a bigger idea and then a full blown freaking plan that makes your brow sweat with fear, but also makes you so excited you have no idea how you’ll remain inside of your skin.

Turns out hope and possibility are the twin sisters that make up Team Life Force. They are always hanging around, but sometimes playing peek-a-boo. Yeah, sometimes they make you work for their presence. You have to plot and scheme to find them because they’re often hiding like Waldo does in those stupid books.

Some people persist in believing the gun laws will never change, but there is a new element in the latest blowback of the most recent school shooting.

They are fearless and passionate and they are fucking angry. They have the energy and importantly the vote (now or very soon) that might begin to make the difference in this thus far losing battle against the NRA and background checks and assault weapons that you can get as easily as a gallon of milk.

These kids lived through something that will run through their heads for the remainder of their lives. They went to school, as usual, only on this day,  there was a mentally ill boy who had been able to get an assault weapon (not to mention several other weapons) who shot at them like they were in the bowels of war. Running down the hallway, hiding in closets, quietly texting their parents that they loved them, these kids lost 17 classmates and any shred of belief in the government who make laws.

These kids. These ordinary high school kids have become extraordinary, speaking out, defying authority, organizing rallies to discuss one of our country’s most pressing issues. These kids, who just a week ago were thinking about classic high school kid stuff, like what’s up for the weekend and what colleges to tour, are now thrust into a decade’s long debate that divides our country like a file folder divides office memos.

These kids with all their idealism and fresh energy and anger might just change what has been the unchangeable.

Gratitude to these kids in this moment. 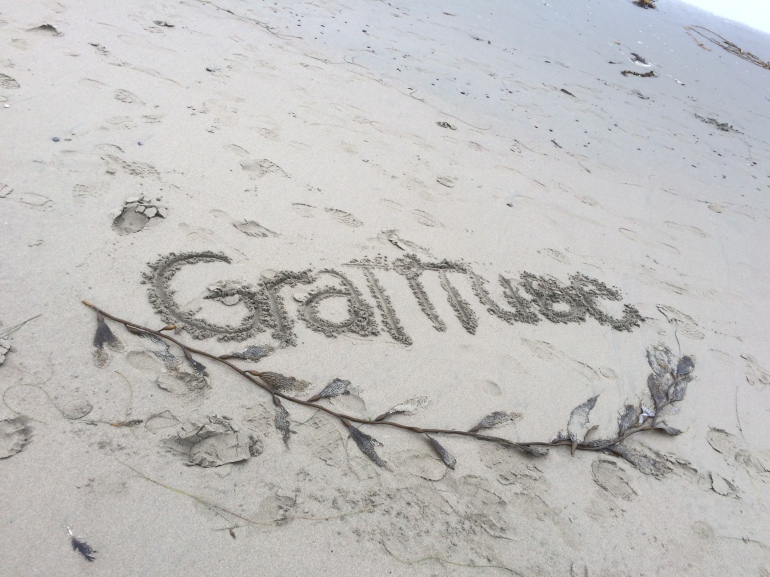 Sometimes it’s just the trees when a breeze floats through them that can make me connect with myself and remember how extraordinary life can be. Other times, it’s my dog looking at me in a knowing way, and like he is getting his vocal chords ready and will talk to me at any moment. A hot bath brings on a gratitude deep in my bones. A meal that is both decadently delicious and healthy is gratitude on steroids. A movie that I can get lost in, a rug that’s thick and allows my feet to sink deep down into it. That’s what I’m talking about.

With all the ugliness and sadness this week (and every fucking week–when will the next mass shooting happen–coming soon), I have to work harder to remember to stop myself in my tracks and take in the beauty and gear up the gratitude.

I look up at the blue sky this morning and it is a sky of hope. I immediately think about all the families who just lost their children because they went to school. And then I feel guilty and bad that I’d even think of possibility in a sky of blue.

But there is room for both. To feel sadness and hope, too. And I’m pretty sure that’s our way forward, to remember, to take action, but also to appreciate, to notice, to allow the good to inhabit us in the face of catastrophe. This is our job. This is how we stay balanced to get the work done. Gratitude forward. 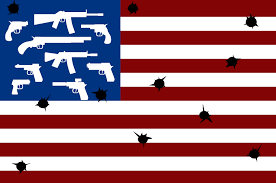 Seventeen this time. Seventeen lives lost because a mentally ill boy had access to a gun.

We have moved beyond thoughts and prayers. We have moved into a space where none of us are really safe anymore. These shootings are taking place everywhere. Schools, movie theaters, churches, nightclubs, concerts.

People say if we didn’t do anything after Sandy Hook, where little kids were the victims, we never will. But the thing is, we can. We can do something and it’s up to each of us to react. This is a take to the streets moment. Because if you think, you think you’re safe, your kids aren’t going to be the victims, those you love would never be in this situation, you’re kidding yourself. You. Are. Kidding. Yourself.

This is not an easy problem to solve, but doing nothing and relying on thoughts and prayers to battle the issues of mental health and easy access to guns is not even trying.

We have to do better before this escalates. And make no mistake, it is escalating. If you’re depressed, it is now an option to wipe out a public place with a gun that’s as easy to get as a box of Wheaties.

What can you do today?

Call your congressman. Call your senators. Watch out for one another. Be alert. If there is strange behavior in a neighbor or a child’s friend, or your child, a co-worker or anyone else you come into contact with, consider what you can do, who you could tell. Help to de-stigmatize mental illness by talking about it openly.

We need to take care of each other. It’s our only hope. Us. Each of us. 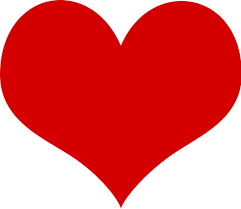 It’s Valentine’s Day, when Hallmark makes off like Jeff Bezos, candy stores work as hard as Lucy and Ethel on that chocolate company assembly line, florists scramble to supply the demand and you panic wondering, despite counting incessantly, if you sent the right amount of Valentine’s day cupcakes to your kid’s class (and of course there is your genuine hope that your child might not have inadvertently forgotten to write one of his classmates a card–ohthehorrorandembarrassment).

I love love. There is nothing better (except maybe gratitude, and well, maybe pasta). And I love a day devoted to celebrating it. But although I enjoy flowers and jewelry and cute handmade cards and heart-shapeed gifts, it’s the way love regenerates that I appreciate the most. 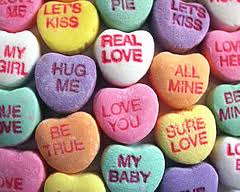 In 30 years of marriage, you have a cornucopia of moments. There are periods of extreme  happiness, where rainbows and unicorns dance around your bedroom. There is  doubt, misery and pain. You can be mad for your spouse one month and mad at him the next. There are Empire State Building highs and middle earth lows (This is true of long friendships, also). 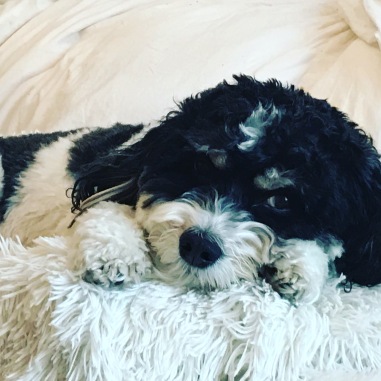 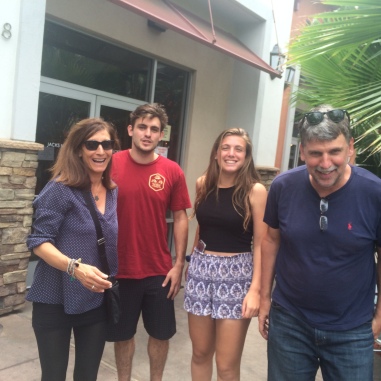 But just when you think, gah, I am done, a small gesture can reignite the thing and the next thing you know, you are back on the right path. Together. Love is like this. It stands in the background when you put it on hold, ignoring you like a toddler at bedtime when you try to reject it, just holding down the fort until you are ready to inhabit it again.

Happy Valentine’s Day to everybody, but the president.

Especially to my family and friends, and very especially to my kids, and my husband, who is traveling for work, making this our first VD apart since we met. I love you. And I am grateful, so grateful you love me. 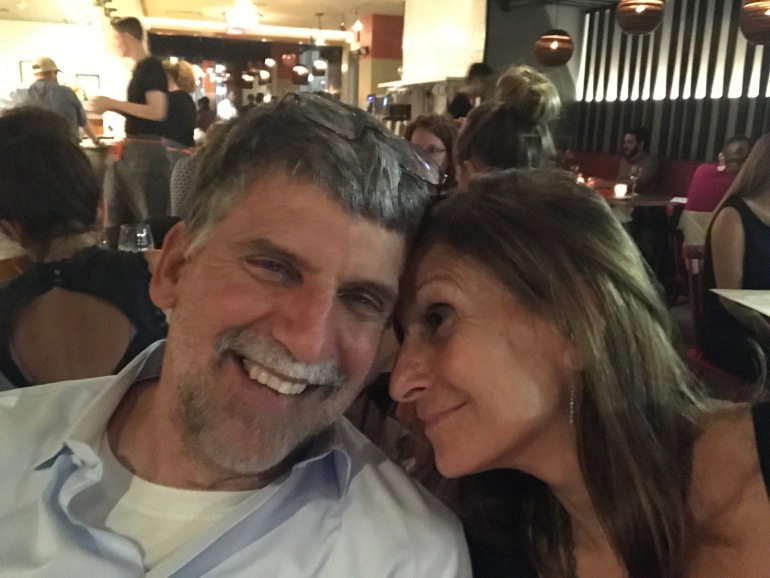 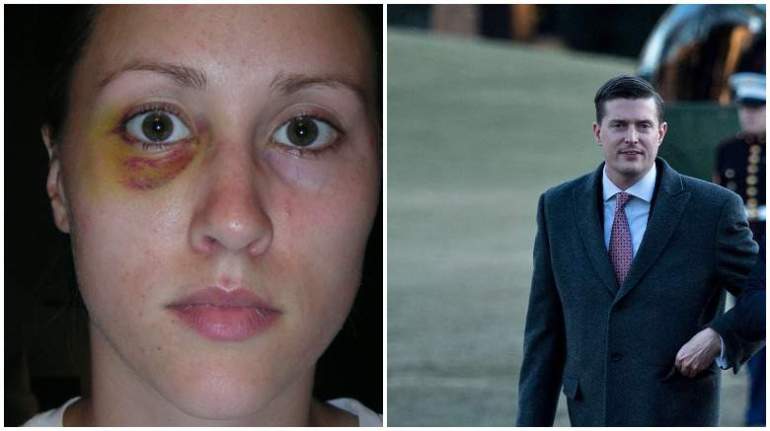 “He did a very good job when he was at the White House.”

“We hope that he will have a wonderful career.”
This is our president’s response to the allegations that Rob Porter, White House Secretary, has been accused of physically and mentally abusing his two ex-wives, Colbie Holderness and Jennifer Willoughby.
There is no mention of the women. There is only “he.” There is no comment on the powerful words each has spoken about Porter, or the terrifying picture of Colbie Holderness with a black eye. There is no “she,” only “he.”
During a pivotal moment in history, when the country-wide #metoo movement is creating a seismic shift in how we view the way men in power can abuse women and get away with it, our president, accused by 16 women of sexual assault himself, will not even speak to the fact that this is a huge problem in this country, let alone that he’s part of it. In a candid Access Hollywood tape, (that, by the way, ended media personality Billy Bush’s career, but not our president’s)  leaked out, Trump says the damning words: 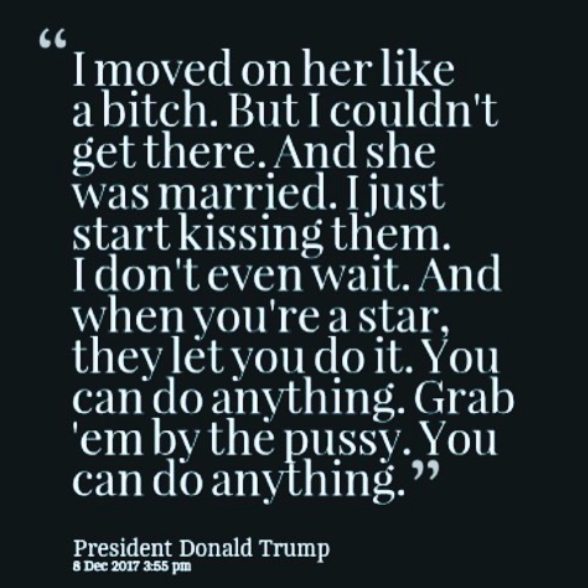 And yet, knowing his gross abuses of women, I still expect more. I still expect that the person we vote into the highest political role in the land be more. Why?

Because we should expect more.

We should expect that the president of the United States be someone you’d like your kids to grow up and become. While it seems to me fair, you may disagree with policies of the president, there should be no disagreement over the character of the man. I am continually disappointed/disgusted/want to run through the streets screaming that our political leader is void of respect for women, minorities and not to overstate, but seemingly all of humanity (go ahead and giggle, but has he not played, no pun intended, Russian Roulet with Kim Jung-un?)
Here on Monday morning, I once again remind myself that this man is not who we are. We are better than this. We deserve more. I remind myself not to let this go, to allow this to become acceptable. It is not. It will never be. RESIST. 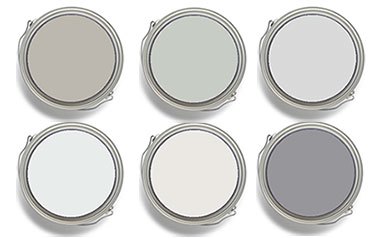 I am having the interior of my house painted.

You’d think I had won the Mega Bucks drawing on the same day I hit the Lotto and Ed Mcmahon showed up from the dead telling me I’d won the Publisher’s Clearinghouse Sweepstakes.

It’s been a long time since we’ve painted, and the wear and tear is everywhere (and no, I didn’t mean for that to be so Dr. Seuss).

I am literally, room by room getting that Christmas morning feeling. I’m damn giddy, I tell you. Also, as a bonus, once a room is all clean and painted, I don’t want to put all the “crap” back into it. This painting thing is a good way to clean. Marie Kondo was wrong–The Life-Changing Magic of Tidying Up should really be, paint your damn house.

And I somehow managed to not only get the best painters I’ve ever worked with, but also the NICEST. Seriously, great people who are experts in color, neat and a pleasure to have my home.

We definitely waited too long to paint, but if we hadn’t, I probably wouldn’t have this overwhelming feeling of gratitude. And well, you know how I feel about that subject.