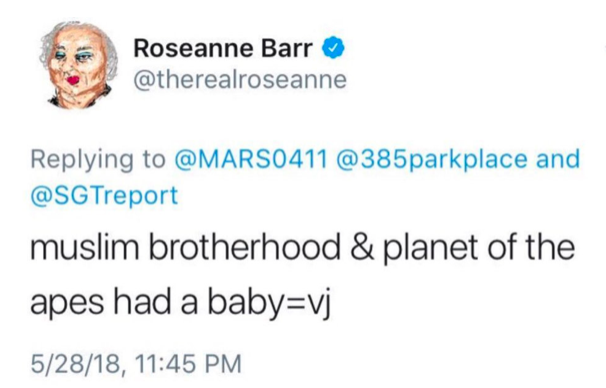 One of the things that I hate, not that I dislike, or that I don’t care for, but actually hate, is the way our president insults everyone. Fact is, the man who leads our nation is a racist, a bigot, a misogynist, anti-semitic,  LGBTQ hating xenophone– a modern day Archie Bunker.

A hater does not belong in the White House. But that’s where he is, (well, when he’s not golfing). And because he’s not a man of integrity or character, he has, through his actions, given every intolerant, prejudiced and immoral person license to come on out of the woodwork and fly their ugly-hearted freak flag.

This air of intolerance has been occurring since the start of Trump’s loose-lipped presidential campaign, and maybe even before when he started with his birtherism claims. Trump has no moral center and there is a general belief that this is becoming ok. That this is the new normal.

ABC hit Roseanne hard for tweeting a gross and racist tweet to Valerie Jarret yesterday. She no longer has a show, a show, I might add, that was the highest grossing show on ABC. Which means the network chose what was right instead of what was green (and has better moral character than Congress).

This is the country I want to live in. Where people in power stand up to unethical and immoral behavior. Gratitude party with the execs at ABC.

If only they could get rid of the president.