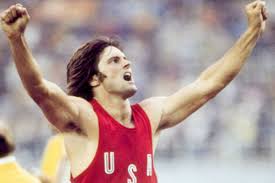 Say what you want about that crazy Kardashian clan, and I believe I’ve made myself clear about my utter distaste for this fabricated, totally unreal reality tv fam, but hurray for Bruce Jenner, who, it has been confirmed, is transitioning into a woman.

I could make about 4,56,891 jokes about this, but instead I’d like to applaud his courage. I can’t imagine having a bout of diarrhea in that family, because there’s a camera covering every move they make, let alone change my gender. Male or female, this Olympian has major league BALLS (deflated ball joke here).

This is a real life “Transparent” scenario playing out in every magazine on the newsstand. This man has not been able to bite his nails without being filmed, so hungry is every paparazzi to prove that Bruce wants to be one of the girls.

The late night banter is rich, the opportunity for laughs is enormous, but to me this is about the most real thing that’s ever happened on the Keeping Up With the Kardashians–one of them realizing, and being who they really are, versus who they portray for ratings and cash. Gratitude for keeping it realz, Bruce.