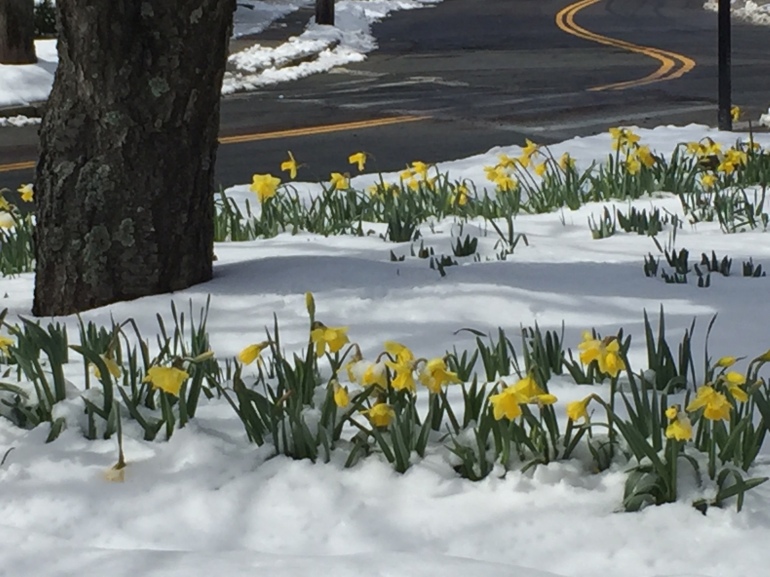 Yesterday was a lesson in “try, try, and just keep trying.” There are bulbs blooming, crocus crying a happy tune, trees getting ready to roll out their buds, when out of the sky, on the second day of spring, comes snow.

But what do I see while driving, but a group of daffodils, waving their yellow heads standing straight up like little soldiers, telling that snow they will NOT BE DENIED. 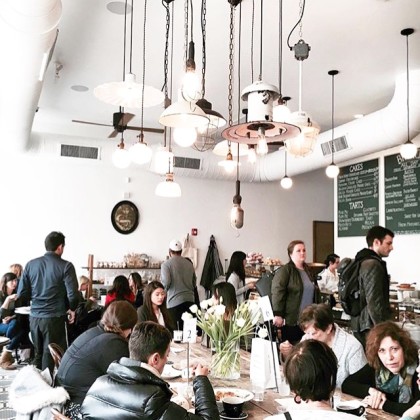 It’s not like anybody’s paying me for endorsements, so don’t think I’m all up in someone’s face to suck up or anything, it’s just that when I find something I love, it makes me want to share it with everybody I know. You’re welcome.

Enter Tatte. From the beautiful logo, which always makes me stop and DROOL, on my way to bringing my daughter to physical therapy, to the brand new enlarged interior that I want to move my bed into, this bakery/restuarant is perfection, plain and simple.

There’s a large outdoor patio, too. The food is sublime. You must go. IMMEDIATELY. If not sooner. 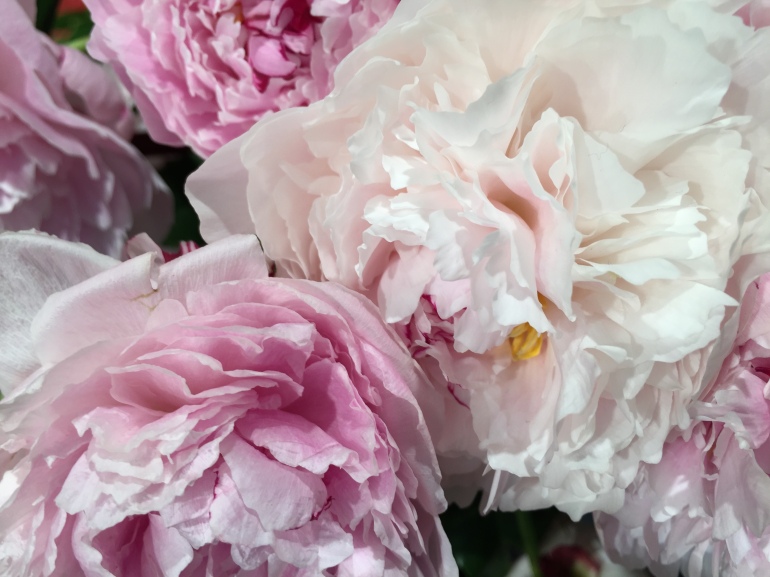 However, I did have fun with my friend, and we did  go to Flour afterward for an eggseptional egg sandwich, have you had their egg sandwiches? If not, please go directly to your nearest Flour and have one immediately, if not sooner. Eggitude.

Ally and I took a trip to the Tip O’Neil Federal building yesterday to renew our passports because drum roll, we’re going to Africa! We are way excited, and if I can make it on the 20 hour flight with my back, we’ll be golden (more about trip later).

But can I just tell you how confusing it was to wade through the passport shit online. I am a fairly intelligent person. Do not use my potty mouth as a way to tell if I am smart. I know plenty of other vocabulary words other than “fuck,” but that word just happens to suit all of my needs. Anyway, back to the Tip O’Neil Federal building. I had a 3:00 conference call, which I thought would be no problem, since we had a 1:30 appointment, and we are just 20 minutes away. But apparently, out of the mouth of the very nice and official policeman/security guard/special forces passport dude — not really sure what he was–they were very busy and behind schedule, which was not usual, and he made some joke about it snowing Sunday and everybody wanting to escape to the Caribbean. Lines, and more lines, and then a forgotten confirmation number, which THANK YOU PASSPORT GOD, they let me waive by using my social security number. Then a fuck-up in my paperwork, which I got lucky wth, because I brought 10,000 papers I’d printed prior, and by accident had the right thing with me in that fat pile.

The passports are in process! That means, Stage One: African adventure is happening! Stage Two: visas, and Stage Three: shots are a few weeks away, just ahead of stage Four: packing. Gratitude for the anticipation of an amazing trip. Man, I love the anticipation phase! 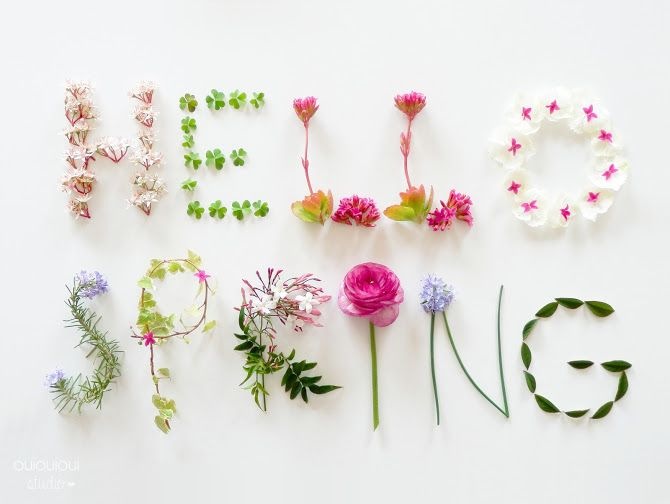 Welcome, you have been missed. But wait, what is it in the forecast? SNOW on Sunday to usher you in? What, have you had one too many Mint Juleps in the green room, waiting to make your debut, and you got a little lost on what you’re supposed to do? Turn on the sun, Spring, not the snow. Have you not been doing this since, like, the beginning of time?

Listen, we had a lovely and mild winter. If you were in those meetings, I thank you for that break, and for answering Boston’s prayers for some make-up sex because of last winter’s bad behavior. Nice job. It was appreciated by all, I can tell you.

But snow on the very weekend of your arrival, c’mon, you’re confused. I think you should reconsider. Do some thinking, I implore you. I already put away the sleeping bag coat and the furry boots. And that is probably why this is happening to start with? Ok, Spring, just try and pull yourself together. It is an “S” word we’re looking for, but it’s sun, not snow. I’m pulling for you. I know you can right your course. 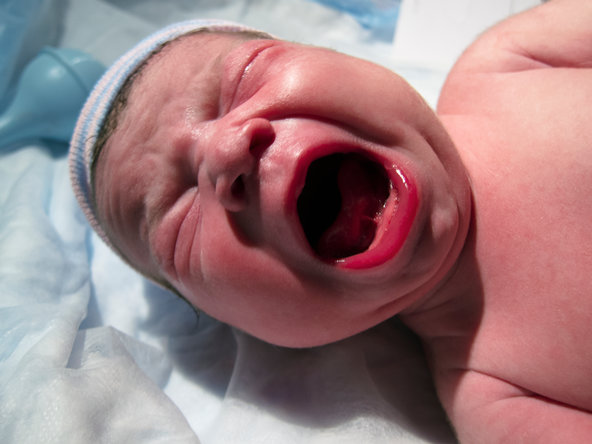 Even though I have an 18 and 21 year old, I read this article on some babies being easier than others, because, well, because I know it to be true. I lived it. And I didn’t have the easy ones.

My gratitude here, in case you were wondering, is that I no longer have those babies (of course, I’d give anything to have them again, diffiuclt as they were).

Neither of my little bundles of absolute adorable slept through the night until they were two. I have never recovered from that lost sleep, and if you see me today, and think I look tired, this is why. Unlike my husband, who could get up, feed them, and drop off into slumberland within seconds of returning to bed, I would be up for hours on end after a crying episode.

Jake was the kind of baby that was into everything, all the time. He was a demolition derby of one, a roller coaster of movement, a baby tsunami. And active? He was active in mind and body from the get go. “Go” being the imperative word.

It was hard to see other kids actually sit down at the beach, a concept I would never know when I had babies. The beach is my favorite place in the world, a relaxing mix of sun, sea and sand makes me smile like an idiot, but when my kids were little, it was a place that meant just trying to keep them alive. It was us against ocean. When we were at the beach, I lived with a perpetual loop of a chain of people wading through the water looking for my drowned child. I don’t even know why we used to go back then. It was like doing an Iron Man to entertain your baby, and prevent them from sinking to the bottom of the ocean.

I envied the parents who had children who behaved, were still in a restuarant, could walk quietly through a store, without turning it into an Olympic running event. I longed to sit with my kids and do art projects, and we did, for like four seconds, before they were gooooooonnnnnnnnnne.

I loved them then. Every drop of them. But they were not easy babies. Not easy toddlers. That’s just how it was, and that’s just how it is. Some babies are easy and some are not. You’re lucky if you get an easy one, but if you don’t, you will live. And they will live and flourish, too. You can’t imagine it at the time. But I’m here to tell the story. You may have bags under your eyes for the rest of your life, but it will be worth the ride.

This funny little guy was overseeing our dinner.

Good morning, Brookline Village! New restaurant alert: Wow Barbecue, And it is. It is pretty wow!

It was a soft opening, so there were kinks to clear up, but the food was great. It’s chinese barbecue, which is not something I’ve ever had before. Fab arugula salad with jicama and carrots and a terrif dressing. And small skewers of meats and vegetables that were perfectly spiced. And lots of other good stuff. It’s across from Town Hall, where that creepy sushi place used to be near the ambulance garage. Funky interior, made to look like a Korean courtyard. Super nice people, too. They were out of tonic for my vodka and tonic, and went and bought some for me! That’s service. And they’re up for takeout, too. It’s going to be a busy spring, I’m putting this place on speed dial.