Ah, La Tour Eiffel. Iconic, romantic, and now a Google Doodle. Can I tell you how much I love those damn Google Doodlers? To me, this is what life should be all about. Celebrating good stuff in inventive and unexpected ways. Google gratitude.

The other day I made waffles. I didn’t make them like, from scratch, or anything, I just put them in the toaster (they are Van’s gluten free waffles, which, by the way, totally taste like they have gluten, meaning they are scrumptious, unlike gluten free bread for instance, which is like eating the real estate section of the New York Times). I dump ricotta or cottage cheese on top with some Aunt Jemima’s light butter syrup for a fab and super satisfying breakfast.

Anywho, I put them on a plate, and walked upstairs eating them, bopped into Ally’s room to see what she was up to, and then took to the stairs, to head on back to the kitchen. Only when I hit the last step, I misjudged, and somehow forgot it was there, because I was paying attention to my mouth and the glorious taste of my waffle, instead of what my feet were doing and I hit the floor with so much force, I fell on my ass, the plate broke into 20 pieces, and the waffle did an imitation of The Flying Wallendas. Boom. I was all like, “what the hell just happened?” Ally came running, I popped three Advil immediately, and iced my foot. I was hyperventilating and breathing like a pervy phone caller.

Course, what I should be most freaked about is the fact that I wasn’t sitting down at my perfectly nice kitchen table to enjoy each and every browned and syruped morsel of my breakfast, instead of traveling around the house eating like Harrison Ford in The Fugitive. I feel like the universe was saying, “Pay attention, or you’re going to trip up.” Which is exactly what I did, I tripped up.

Sometimes I don’t get the subtle messages that come at me, but when I remember to look for them, there they are. This one was pretty literal. I’m grateful I wasn’t behind the wheel, focusing on one of my Almond Cashew with Flax Kind Bars, instead of the road. That could really been a disastrous wake up call.

There are days when I need to bust out the multi-tasking, but a leisurely Saturday morning wasn’t one of them. So, I’m taking it as a lesson, and trying to be more aware of doing one thing at a time when I can. Maybe I’ll have eggs this morning. Sitting down. At my table.

Always super excited for a book review that makes me think “I’m about to have a great ride.” Kindling up The Precious One today. Love CAN change the world. Oh yeah.

I laugh a lot. I think funniness is next to Godliness. To me, nothing is better than a good guffaw, especially when the chips are down.

If I could tell you how many situations I have been in, where a two trillion buckets of tears were shed, and life was reconsidered, and the darkest hour right before the dawn seemed to stick around, you would fall asleep. But in almost all of those cases, the answer turned out to be simple.

I was brought up in a house with two really funny parents. My mother had great timing. My dad had awful timing, which is what made him so hilarious. They both had wicked senses of humor. To me, funny is about as good as it gets. Laughing is the free medication that doctors never give you a prescription for, although if you’ve been in for a physical lately, you will likely get a giggle over just how fast they can give you the once over (remember the Evelyn Wood Speed Reading course? Apply to doctor’s appointments, and you’ve got the picture). Both of my sisters are funny, each in their own particular way. And they can make me laugh until I cry. My daughter and son both have the funny gene. My husband is funny when he doesn’t even mean to be. Even my dog is absolutely a riot.

Turning a bad, awful, even horrible situation into a chuckle is something I’ve grown into. Being exquisitely sensitive has forced me to lighten up when I can. The world is much too much. You’ve got to look at every angle, and turn it on its ear as frequently as possible. That’s often where the best snort-laughs are found. And that is the end of the rainbow. Plus laughing is actually good for your health.

Check out this article on what those funny folks at Harvard have to say about a good ha, ha, ha. Linda Loma University in California’s associate professor Lee Berk, who’s spent almost three decades studying how a good laugh affects your health, says that your mind, hormone system and immune system are constantly communicating with one another in ways that impact everything from your mood to your ability to fend off sickness and disease. Take grief: “Grief induces stress hormones, which suppress your immune function, which can lead to sickness,” he says. Hardly a week goes by without new research tying stress to another major ailment.

Why mention stress? “Because laughter appears to cause all the reciprocal, or opposite, effects of stress,” Berk explains. He says laughter shuts down the release of stress hormones like cortisol. It also triggers the production of feel-good neurochemicals like dopamine, which have all kinds of calming, anti-anxiety benefits. Think of laughter as the yin to stress’s yang.

There are a bout 1,345,892 other studies on this too. Check out Norman Cousins story, if you really want to laugh. There are even people who can teach you how to do it.

I am always mining a situation for its comedy gold. It’s how I make my way through life. If you’re not laughing enough, the joke is on you, because this is the best way to help you navigate the rough patches. I had a challenging week, but by yesterday, I was able to find some jokes in it. Ha! Gratitude goes to the giggle.

I didn’t used to be a dog person.

I never liked barking, or stupid dog tricks, or people who talked about pooches like they were real live people. I never thought pictures of dogs were cute, or funny, or stories about dogs were cute or funny, or the dogs themselves were cute or funny. I didn’t understand the concept of a dog being like  a child, or a companion, or a best friend. I didn’t get people who went on exotic vacations and missed their dogs, or people at work, who wanted to know what their dog was doing, I wasn’t moved by sappy dog food commercials, or cute patterned leashes, or the full range of fashion items available for puppies. 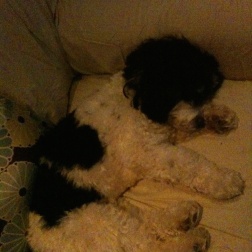 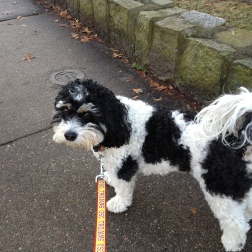 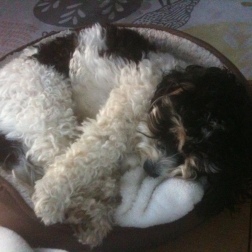 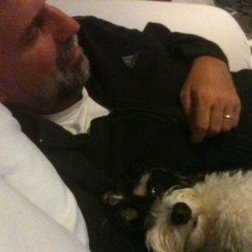 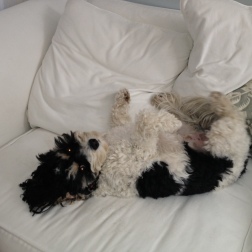 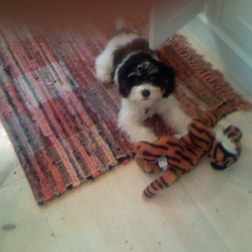 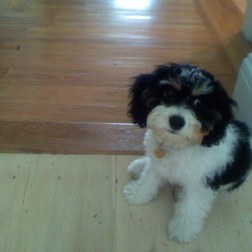 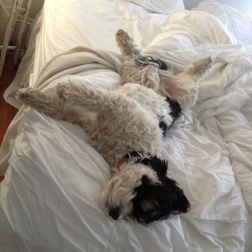 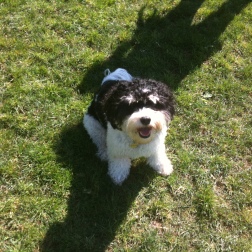 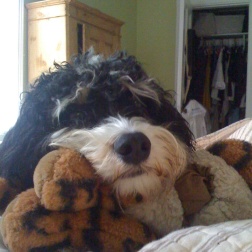 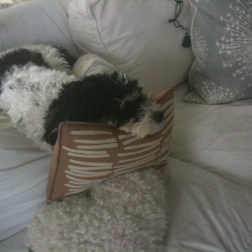 And then I met Riley.

And everything changed. In fact, I seriously will say that my whole life changed. For the better. Because I became a dog person. I will come out and say this silly thing, which is that I love Riley in the same way I love my kids. I would do almost anything, hell, I’m going to go ahead and say ANYTHING for him. I have said it before and I’ll say it again, Riley is the best person I know. 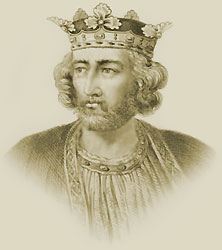 Aren’t there days when you just want to change the rules?

I would make life fair. All the pieces and people would move and a major re-org would take place. (It would be exhausting, IMAGINE HOW MANY MOVING TRUCKS YOU’D NEED).

I would de-calorize food, so we didn’t have to spend even a second in the absurd land of having to worry about what we eat, or drink, and instead think about more important things, like cheese and crusty bread. I would kill winter and snow (sorry skiers), and enforce a sunny 70’s, 365 days a year. I would make dogs people. I would de-crown the Kardashians. I would make everybody say hello to each other. I would put Mother Theresa on all of our paper money, maybe even coinage. I would replace baseball with gratitude as our national pastime. I would strong-arm dissenting countries into sitting down in a room with lots of good food and not coming out until they could settle their differences. I would destroy all the guns in a spectacular and fiery fire. I would make everybody dance for two hours a day. Free coffee for all, total beach access, everybody would garden, we’d walk or bike instead of drive. We’d put down our phones, walk away from our computers and look one another in the eyes.

It’s just one of those days. When I’m dreaming of what I wish, instead of what is. Sometimes, it’s fun. And sometimes you do it because reality is so harsh you need a break from it. What’s on your list? What would you change?

In case you think that celebrities have it made in the Hollywood shade, and that they aren’t really like the Us Magazine page “They’re Just Like Us,” Angelina Jolie comes along publishing another Op-ed announcement in the Times about how she has just had her ovaries and fallopian tubes removed because her inflammatory markers were elevated, warning that she may have an early stage of cancer. She does not, but she does have my total admiration (as if that’s anything she’s going to be excited about).

Thing is, (as I wrote about here when she had a preventive double mastectomy) Angelina is one of the biggest stars on the planet, married to one of the biggest stars on the planet (they’re like a flipping constellation), but they are no ordinary celebrities. These are some good, quality people. These are people who work for humanitarian causes, who are family-oriented, who try to stay out of the the blinding glare of the Hollywood machine. Because Angelina came forward with this latest health news, in the respected Times, she is helping countless women to examine their health care options. This is big stuff. Forget the movie star label, I say slap Super Hero on her back.

Angelina is more than beautiful (she really is, there needs to be a new word for her). She is a smart and ethical woman, with an intelligence and candor that can affect millions. Long may she live.